They Couldn’t Have Known 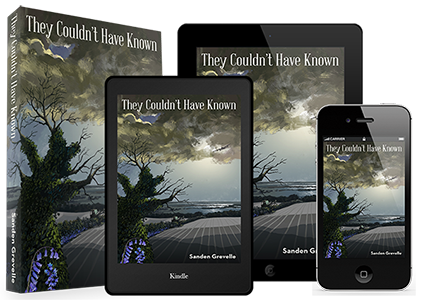 BUY NOW in Paperback and in Kindle and ePub formats.

THEY COULDN’T HAVE KNOWN
BY SANDEN GREVELLE

A village near London is destroyed during World War Two, not by enemy action, but by the ruthless development of a civilian airport under the guise of wartime requirements. The poorest of the village, including two indomitable spirits – Lizzie and Allen – offer the greatest resistance.

Allen, an innocent abroad in an increasingly chaotic and dangerous world, loses his childhood love Gill to Piotr, a young Polish survivor of the Russian labour camps. Becoming further alienated from all around him, Allen finds himself innocently embroiled in major crime.

Post-war immigration – including refugees from Eastern Europe and those from the colonies seeking a new life in the ‘mother country’ – produces an unprecedented social milieu in which unlikely love and friendship emerge in the face of racial and cultural prejudice.

Burian, exposed as a war criminal from Eastern Europe, hunts Piotr and Lizzie with murder in his heart. As the tension mounts, the division between the natural and supernatural becomes increasingly blurred, leading to Burian’s bizarre demise.

BUY NOW in paperback and in Kindle and epub formats.